South African tourism service excellence was the biggest winner on Sunday 29 October 2017, when the fifth annual Lilizela Tourism Awards lit up the Sandton Convention Centre with an unforgettable night of the stars.

View the full list of all 2017 Lilizela Tourism Awards Winners: Click on the image below or go to https://www.tourismtattler.com/downloads/2017-Lilizela-Tourism-Awards-Winners-List.pdf 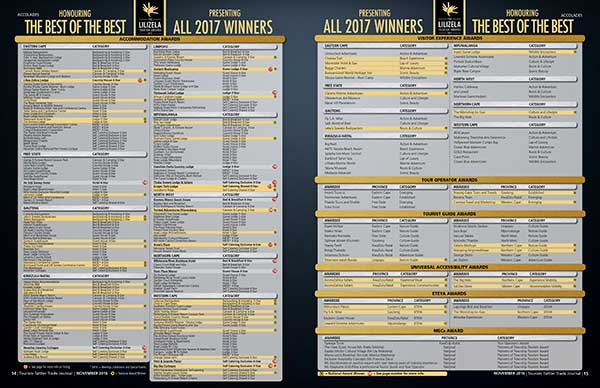 The who’s who of the hospitality and travel industry came out to salute service excellence in South Africa’s burgeoning tourism sector, which has been identified by the government as one of the six pillars of the country’s future economic growth.

The national Lilizela Tourism Awards were the culmination of the nine provincial ceremonies held across the country, which rewarded outstanding establishments in each of those areas. These provincial winners then vied for top honours in the national finals, held on Sunday.

Tourism Minister, Tokozile Xasa paid special tribute to South Africa’s outstanding small tourism businesses. Some of the SMMEs that were finalists or scooped awards on the night had been beneficiaries of the National Department of Tourism’s market access and enterprise development programmes.

We Do Tourism Award

Minister Xasa also unveiled a new public participation category for the Lilizela Tourism Award 2018, the “We Do Tourism Award” where, in the spirit of asking South Africans to rally around tourism as a catalyst for inclusive economic growth, South Africans from all walks of life will have the opportunity to nominate dynamic individuals who they believe deserve to be recognised for contributing to making South Africa more welcoming.

During an interview with TourismTattler, South African Tourism’s Chief Executive Officer, Sisa Ntshona said that all South Africans deserve to be recognised for the role they play in growing tourism. “On the back of the Finance Ministers budget speech, government has recognised the importance of tourism as a key contributor to GDP, specifically in light of traditional sectors not performing well.”

Ntshona noted at the gala ceremony that it had not been an easy year for tourism, with natural disasters, a sluggish economy and other factors making the operating environment a difficult one to navigate.

“But, despite these setbacks, our tourism industry has forged ahead with remarkable resilience and has insisted that it will be business as usual. You are true examples of what it means to ‘do tourism’ – our movement that encourages South Africans to place tourism and the broader tourism economy at the heart of all they do. You are helping us to stand tall and proud as a tourism destination,” Ntshona said.

A special moment came at the end of the evening, when Minister Xasa inducted Esther Mahlangu, South Africa’s world-renowned Ndebele artist and industrial design trailblazer, into the Lilizela Hall of Fame. Mam’ Esther, who received the Minister’s Award last year, became the inaugural Hall of Fame inductee for being an exemplary global ambassador for South Africa’s indigenous arts and cultural heritage.

The Lilizela Tourism Awards are an initiative of the National Department of Tourism and are spearheaded by South African Tourism. The awards were established in 2013 to recognise and reward exemplary service among businesses in the local tourism sector, ranging from accommodation establishments and tour operators to scenic attractions and cultural heritage sites. The awards are adjudicated through public votes and by a panel of industry judges and are audited by Grant Thornton.

Entry to the Lilizela National Tourism Awards is free and tourism businesses of all sizes are encouraged to enter in a bid to help develop, grow and transform the industry while celebrating its achievements.