The SAB World of Beer is a sophisticated event and conference venue in Johannesburg’s trendy Newtown area. Since opening its doors nearly 20 years ago, it has become one of the country’s top attractions for foreigners and locals alike, and has a five-star grading from the Tourism Grading Council. SA Tourism has awarded it the “Top Tourist Attraction Category Winner” for 2009 and 2011.

While many people might be tempted to believe that the origin of beer is any fridge close to them, the truth can be uncovered right here in Johannesburg, at the South African Breweries World of Beer.

This tourist attraction and conferencing venue has been fascinating people of all ages since it was opened by Nelson Mandela in 1995, offering an entertaining 75 minute walk through the history of beer in technicolour glory. Taste traditional beer while sitting in a mock African village, meet Charles Glass, explore the hop-growing process and step into Hathor’s tomb to watch a fun holographic video which tells the story of how beer arrived in Egypt.

The tour ends off with a cold pint in the Tap Room overlooking the city, and a keepsake World of Beer glass.

The Big Beer Experience, third millennium technology that gives the World of Beer its dazzling lights, holograms and special effects, will ensure that visitors marvel at the modern day telling of the age-old story of beer.

But the SAB World of Beer is not just one of the country’s top rated tourist attractions; it is also a five star graded conferencing venue, which offers the chance to mix business with a more relaxed entertainment aspect. The venue can accommodate sophisticated black-tie functions, product launches, press conferences as well as unique team-building activities and informal festive occasions, in five conference rooms.

An in-house restaurant provides delicious meals, not only for delegates (for whom specially-tailored menus can also be created) but also for visitors who would like to enjoy a pub lunch, such as a Castle Milk Stout beef pie, hake in Castle Lager batter, Hansa Marzen Gold basted chicken or lighter meals, such as salads or toasted paninis.

The SAB World of Beer is open from 10am-6pm, Tuesday to Saturdays, and tours run on the hour every hour. Mondays are open by request only.

The guided tours take visitors on a trip back in time through the origins of beer and the history of the South African beer industry.
Step into an immersive, surround-sound, multi-media experience where Charles Glass comes to life and opens the door to a journey like no other.

The Big Beer Experience uses third millennium technology to give the World of Beer its dazzling lights, holograms and special effects which will ensure visitors marvel at the modern day telling of the age-old story of beer. The tour ends off with a cold pint in the Tap Room overlooking the city and a keepsake World of Beer glass.

Open to the public as part of the tour (maximum of 30 guests), the beer tasting takes visitors through the characteristics of five iconic SAB beers and their specific brewing processes. For private bookings (as part of a conference or team building), a SAB brewer facilitates the beer tasting for larger groups.

For private events, a SAB brewer and a celebrity chef will create a beer and food pairing menu and host an interactive and entertaining meal for your guests.

Branded merchandise is available to the public from the Tankards & Togs shop. This much sought-after beer memorabilia includes everything from Castle Lager T-shirts and Castle Milk Stout ice buckets to Hansa glasses and Castle Lite cooler bags.

Various beer related add-ons can also be arranged, including beer tastings with one of SAB’s master brewers or beer and food pairings with a celebrity chef.

Full day and half day packages:

• The choice between five conference rooms to accommodate your requirements.

• Catering – Set menu options or design your own with our chef.

Situated in downtown Johannesburg, World of Beer provides an ideal venue for pre and post event hospitality. Packages are available for private bookings coinciding with sport and cultural events happening in the city.

“SAB has supported the craft industry by sponsoring festivals, assisting brewers with information and access to raw materials such as malt and hops. By extension, the World of Beer is a natural fit as main prize sponsor and awards host,” said Paul Verdu, SAB’s General Manager: Global & Speciality Brands. “We realised early on the role we, as a market leader, could play and that promoting the culture of beer and growing affinity for beer could only be good for the beer industry as a whole.”

The SAB World of Beer will host the judging panel of the annual SAB Sports Media Awards 2014 later this month (October 2014). The awards, which is currently in its 34th year, is one of the most prestigious in the country and aimed at those members of the sporting media fraternity who have consistently delivered a high level of journalistic excellence over the past year across a variety of disciplines.

“Due to the huge popularity of sports in our country, the well-known personalities in the sports arena are not only those directly involved in a sport but also but those who report from the side-lines,” says Robyn Chalmers,Head of Media and Communications for SAB. “These awards allow us to honour and thank those men and women of the media who help make those great sporting moments memorable, but also highlight new and burgeoning talent across the media landscape.”

The address at 15 President Street, Newtown, Johannesburg, is within walking distance of the three major railway stations and conveniently located on one of the city’s main taxi routes. Shuttle services from the Gautrain station can be arranged at a minimal cost.

For more information contact SAB World of Beer on +27 (0)11 836 4900 or email events.co-ordinator@za.sabmiller.com or visit www.worldofbeer.co.za or check reviews on TripAdvisor or join their Twitter page: @SABreweries. 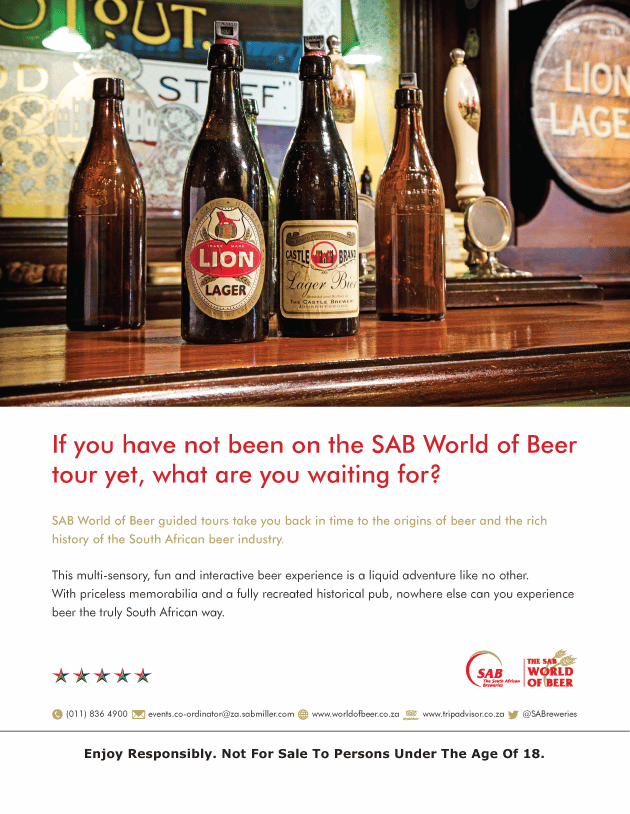 50 Ways to explore Cape Town for under R50