According to the Aviation Safety Network, 2012 was the safest year in terms of aviation accidents across the world since 1945. Of the 23 fatal airlines accidents, 511 people died. This is well below the annual average of 34 commercial aviation accidents and 773 fatalities in the past decade. And yet, the recent crash of the Asiana Airlines Flight 214 after a 10 hour flight from Seoul in South Korea, at San Francisco International Airport on July 6, 2013 has raised a number of pertinent questions about the safety of air travel and civil aviation security across the world.

According to the International Air Transport Association (IATA) about 3 billion people flew safely on 37.5 million flights in 2012 while there were six crashes and 75 accidents. According to a 2011 study, flying in the US is 23 times safer than driving and is about as risky as riding an escalator. The fear of flying is greatly perception based. The Asiana Airlines Flight 214 itself was survived by 305 of the 307 on board.

Apart from sabotage or intentional harm, air accidents are generally due to:

Environmental Factors. Weather plays a key role in flight safety. Poor visibility, lightning, cloudbursts, and other inimical weather conditions hike up the risks of an aviation accident. Bird hits may also cause damage to the craft and the airofoil. A number of airports across the world are deficient in bird-search radar and do not deploy audiovisual aids to scare birds.

Technical Factors. Technical factors contributing to a crash could include lack of adequate radio-navigational aids, mechanical problems with the engine/avionics, or parts malfunctioning during flight. Technical errors include system issues. The Boeing 787 Dreamliner suffered from a number of fires on board related to its lithium-ion batteries.

In January 2013, the FAA grounded all 787s in the US. The EASA, Japanese Transport Ministry, India’s Directorate General of Civil Aviation (DGCA), and Chile’s Dirección General de Aeronautica Civil (DGAC) also grounded all Dreamliners in their airspace. The ban was lifted by FAA in April 2013 after Boeing revised the battery design completely.

Human Error Factors. The human error factor is the most poignant and important among all the causes for crashes. Pilot/ground crew fatigue, experience (or lack of it), mental-physical strength are all contributing factors. Competent air traffic controllers and pilots with adequate English language skills are imperative for effective radio communication as well.

According to statistics from planecrashinfo.com, pilot error has been the leading cause of aviation accidents through all time.

Tenerife, Canary Islands (Spain) – March 27, 1977 – 583 people died when two Boeing 747s collided on the runway in Tenerife. In what is deemed the worst accident in the history of commercial aviation, KLM Flight 4805 and Pan Am Flight 1736 collided due to bad weather conditions, lack of radar capabilities and other miscommunications. Most of these have now been rectified.

Mount Osutaka (Japan) – August 12, 1985 – A total of 520 people (15 crew and 505 passengers) died when Japan Airlines Flight 123 left Tokyo en route to Osaka but a failure of the Boeing 747SR’s rear pressure led to a crash into Mount Takamagahara.

Charkhi Dadri, New Delhi (India) – November 12, 1996 – Saudi Arabian Airlines Flight 763 and Kazakhstan Airlines Flight 1907 collided mid-air over the village of Charkhi Dadri in India killing all 349 passengers on both flights. The Kazakhstani pilots were found to be deficient in English language skills and the New Delhi airport was found to lack secondary surveillance radar.

Paris (France) – March 3, 1974 – 346 people died when a Turkish Airlines Flight 981 crashed outside the French capital. The rear cargo hatch of the McDonnell Douglas DC-10 had blown off, causing the cables to split and leaving the pilots with no control.

Riyadh (Saudi Arabia) – August 19, 1980 – 287 passengers and 14 crew members on board Saudi Arabian Flight 163 caught fire right after takeoff from Riyadh International Airport on a flight to Jeddah. The Lockheed L-1011-200 TriStar made an emergency landing but evacuation was delayed leading to the high causality count.

Chicago (USA) – May 25, 1979 – 271 people (258 passengers and 13 crew members) died when the engine on the left wing of the McDonnell Douglas DC-10 fell off and damaged the craft of the American Airlines Flight 191 in one of the worst aviation disasters in the US.

New York (USA) – November 12, 2001 – 260 passengers and 5 people on the ground were killed when American Airlines Flight 587 (Airbus A300) crashed into the Belle Harbor neighborhood of Queens. The accident was attributed to the first officer’s overuse of rudder controls to balance out turbulence from a flight that had taken off a few minutes prior.

Komaki (Japan) – April 26, 1994 – A total of 264 crew and passengers died when the first officer of the China Airlines Flight 140 made an error just before landing at the Nagoya Airport in Japan. The Airbus A300 malfunctioned when the pilot accidentally pressed a take-off button while landing.

Jeddah (Saudi Arabia) – July 11, 1991 – 261 people, most of whom were pilgrims travelling to Mecca died on board the Nigeria Airways Flight 2120 when the McDonnell Douglas DC-8 caught fire and the craft crashed at a distance of about 19 kilometers from the King Abdulaziz International Airport.

In January 2013, the Jet Airliner Crash Data Evaluation Centre (JACDEC) released its rankings of the safest airlines in the world based on a compilation of data going back to 1983. According to the JACDEC, the top 15 safe airlines of the world are: 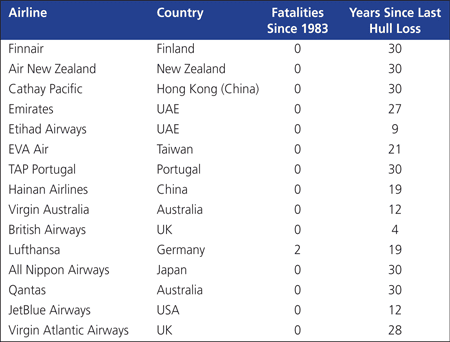 The top North American airlines by safety are:

Sabotage and security are among the major concerns faced by airlines through the years. The first known episode of a commercial airplane hijack was on July 16, 1948 when hijackers attempted to gain control of a Cathay Pacific seaplane causing it to crash into the sea between Macau and Hong Kong. Some of the most notorious hijacking cases include:

What Are The Odds?

According to a study by the Valk Foundation, a joint project of the University of Leiden, KLM, and the Amsterdam Schiphol Airport, about 40% of people experience some anxiety about flying. Most of the anxiety and fear surrounding flying come from the perception that flying is not safe or that chances of surviving a crash are slim.

Contrary to popular perception, the odds of a plane accident are about 1 in 1.2 million. Also being in a plane crash need not necessarily be fatal. Among the 568 plane crashes in the US between 1980 and 2000, over 90% of crash victims survived. An average American’s chances of being killed in a plane crash are one in 14 million. The survival rate in even one of the major crashes is about 76%.

The best chances of surviving an air crash also depends on the seats you may choose. Those seated in the first five rows have a much higher chance of surviving a crash than those seated elsewhere. Knowledge of safety procedures, awareness of exits and preparedness adds 35%-40% chances to a person’s ability to safely evacuate a craft in trouble. In the past decade, airline passengers were 10 times more likely to die in air accidents than they are now. Studies also suggest that passenger alertness in the first three minutes and the last eight minutes of a flight could be a major factor in surviving crashes since over 80% flight accidents occur during this time. It is suggested that passengers avoid alcohol, stay alert and remove earphones during this time.

Tips To Surviving A Plane Crash

Article published with acknowledgment to Maps of World.

View this article in Infographic format at: