Many travellers are confused about all these new airlines in South Africa – why does one carrier charge extra for luggage when the others don’t? Why does one give me a free cup of coffee when the other guys are charging R15 for it? It’s our mission to educate the market about these airlines and show why, despite their different business models, they are not out to dupe consumers, writes Russel Jarvis of TravelStart.co.za.

The advance of South Africa’s budget airlines, recently joined by FlySafAir and Skywise, looks set to benefit air travel consumers as competition between the private and state-owned sector strengthens. A study done in February showed how FlySafair had already helped bring prices down on some domestic routes. Now we look to Skywise to continue the momentum. Currently operating flights between Johannesburg (ORTIA) and Cape Town on a fleet of 2 aircraft, the newcomers’ growth strategy is clearly cautious and methodical.

But there seems to be some confusion about who exactly these airlines are, where do they fly, and in each case, what do they offer consumers? One passenger said, “What a shock it was to find out we have to pay an extra R250 for luggage on the FlySafair flight!” While it’s understandable for consumers to be wary of these seemingly unfair pricing methods, the truth is many mainstream budget carriers (such as Ryanair in Europe) have been conducting business like this for years – it is commonly referred to as the low-cost carrier model, and is widely accepted by passengers as a ‘no frills’ way to travel.

TravelStart.co.za created the domestic airline comparison infographic (scroll down to end of this article) to show you the width and breadth of South Africa’s internal carriers and how the new budget airlines are helping South Africans get in the air for less.

In comparison to the rest of the world, South Africa’s commercial aviation industry has remained relatively small over the years. The independent carriers have faced David & Goliath style battles against the legacy carriers, and traditionally, government bailouts and interim interdicts have delayed the launch of much anticipated ‘saviours’ of the low-cost airline industry.

Tourists and the travel trade, know what it’s like to suffer at the hands of a monopoly – just think back to that dark period which clouded the sky about the same time as 1Time Airlines applied for business rescue in August, 2012. In the following weeks we watched in dismay as the airline met its end, rendering competition amongst SA’s domestic airlines all but dead. I remember my friend was in Zanzibar at the time. He’d happily flown out on 1Time only to discover the airline ceased operations the day before he was meant to fly home.

Seat sales became a thing of the past as the monopoly tightened its grip, and then in late 2014, like a phoenix rising from the ashes, there was suddenly a new player in town when FlySafair finally overcame the resistance from its established competitors.

Suddenly price conscious travellers were being catered for again, and travellers had more freedom of choice as the new no frills airlines made it cheaper for more South Africans to fly. Now with Skywise mixing it up on the ever-popular Joburg / Cape Town leg, the state of the airline industry hasn’t looked this bright in a while and we look forward to seeing the low cost carrier rise and become an increasingly utilised mode of transport in the eyes of consumers everywhere.

1. When booking a flight, spell your name as it is in your passport or ID document. No nicknames, shortened names etc.

2. If you book flights with Mango, remember to check in with the credit card you used to make the booking.

3. For domestic flights in South Africa, arrive at the airport at least 90 minutes before your flight departs.

4. If you can’t make your flight you must cancel your ticket at least 2 hours prior to departure either with Travelstart, or the airline directly. In some cases no-show fees may apply.

6. Remember to check in online 24 hours prior to departure and print out your boarding pass, or save a copy on your charged mobile phone.

7. A birth certificate (does not have to be unabridged) suffices as a form of ID for minors travelling within South Africa.

8. Take the Service Package (R99) when checking out on Travelstart and get help with meal requests, seating requirements, wheelchair assistance and more.

Skywise: Bags fly free up to 20kg. You are allowed TWO bags (including sporting equipment) up to 20kg in total.

FlySafair: In line with the true low cost model mentioned earlier, FlySafair will always charge extra for checked luggage – they are the only airline doing this. The cost is R150 for 20kg if you book FlySafair through Travelstart, or R250 if you pay at the airport. Why? More than 40% of domestic passengers only take a carry-on when flying. With FlySafair you don’t pay for what you won’t need.

Mango Airlines: Luggage is included in the price of your Mango Airlines ticket. Allowance is set at 20kg per passenger. Infants have a 10kg baggage allowance but have no seat allocation.

Kulula: Luggage is included in the price of your Kulula Airlines ticket. Allowance is set at 20kg per passenger.

SAA: Luggage is included in the price of your SAA ticket. Allowance is set at 23kg per passenger.

British Airways: Luggage is included in the price of your BA Comair ticket. Allowance is set at 23kg per passenger.

Airlink: Luggage is included in the price of your Airlink ticket. Allowance is set at 20kg per passenger.

SA Express: Luggage is included in the price of your SA Express ticket. Allowance is set at 20kg per passenger.

About the author: Russel Jarvis is Head Of Communications at TravelStart.co.za – Africa’s leading online travel agency. 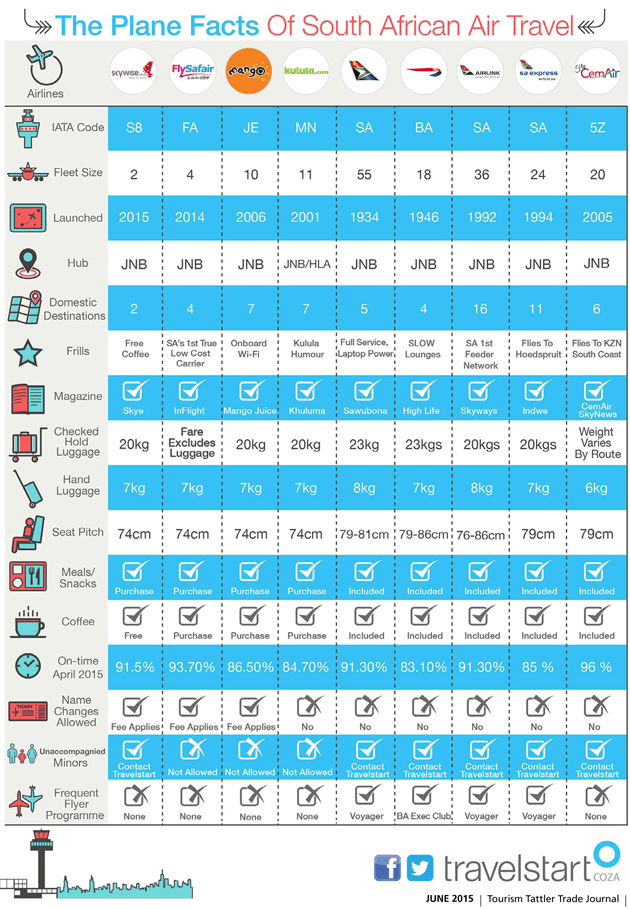