In an industry known for small margins and high operating costs, South Africa’s low domestic airfare prices could be a big threat to an airlines existence. In this article Russell Jarvis looks at how sustainable this trend is for local airline businesses.

South African air travellers have felt the positive impact of increased competition in the local airline industry as new carriers vie for their attention. Hopping on a plane to Cape Town, Johannesburg, George and Port Elizabeth is cheaper nowadays than it was in 2012. But how sustainable is the downward trend in fare prices for local airlines?

Analysts at Travelstart South Africa say the decrease in fare prices on several local routes could be detrimental to the growth of the commercial aviation industry and have warned consumers to prepare for increases as the market seeks stability.

A surge in demand for local flights at low prices coupled with an increase in the capacity of providers operating scheduled services on high volume routes such as Johannesburg to Cape Town has further driven down ticket prices in recent months. However, as the main cast continue to out seat-sale each other in a bid to win consumers, industry experts predict a shift away from uncharacteristically low fares. Sale extravaganzas and consumer delight have little long-term benefit for airlines. Prices are likely to bottom-out soon as the airline industry responds in favour of market stability and long term, healthy competition.

Most In Demand Routes in South Africa:

A study of four key domestic routes shows a sharp increase in demand for flights since last year; none more so than the popular Johannesburg to Cape Town route, which is borne out by an 85% increase in bookings on this route through Travelstart compared to last year. 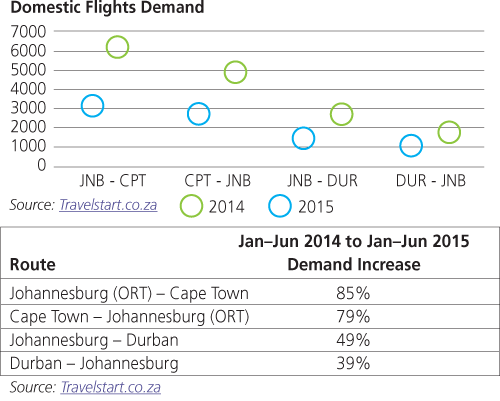 While the airline industry has been revitalised by the presence of four new local carriers – each offering a different value proposition to customers – distressed seats and rising operational costs fly in the face of profits.

When you consider that most airlines need to be selling a seat for at least R900 – R1000 one way, and have a load factor of 70 – 80% on each flight that takes off just to make a marginal return, it stands to reason that the low ticket prices available at the moment will soon be a thing of the past.

About the Author: Russell Jarvis is Head Of Communications at Travelstart – a pioneer of online travel. Founded in 1999 in Scandinavia, in 2010 the European side of the business was sold off and since then Travelstart has built a strong business with local offices and a core focus on the African continent, Middle East and Turkey where the company are now market leaders.