According experts gathered at the Africa Hotel Investment Forum, the hotel and tourism industry in Africa is set for a period of sustained growth, writes Anja Eckervogt of Tarsh Consulting.

The hotel and tourism industry in Africa is beginning a period of sustained growth, according to the sector’s leading experts gathered at the Africa Hotel Investment Forum (AHIF) held in Addis Ababa, Ethiopia from 30 September to 1 October 2015.

The conference heard that inward international flights were recovering after being hit by the ebola outbreak. And the hotel sector reported significant expansion, as well as increased visitor numbers, boosted by demand from African business.

Now in its fifth year, AHIF brought together 500-plus leading international hotel investors, local operators, government officials and industry experts from around 40 countries.

The immediate good news came from ForwardKeys, which monitors future travel patterns by analysing 14 million reservation transactions each day.
Its analysis showed there was an increase of 6.4% in international arrivals in September in Sub-Saharan Africa. The upturn marked a turning point after the ebola outbreak, which had wiped out four years of strong growth.

Flight bookings for the next six months suggest a sustained recovery. The data shows arrivals on-the-book (bookings for travel in future) from October 2015 to March 2016 are now running 4% ahead, compared with the same period last year.

The 2015 African Hotel Valuation Index, released at the conference by HVS, revealed that the African hotel sector was becoming less reliant on foreign visitors with increased demand from local businesses.

The Index showed African hotel brands such as Azalai, City Lodge and Protea were trading well, with a number of hotel investors showing faith in the continent.

In another special market report, hotel consultants Horwath HTL said they expected a surge in projects in Cameroon ahead of the Africa Cup of Nations which will be held there in 2019. 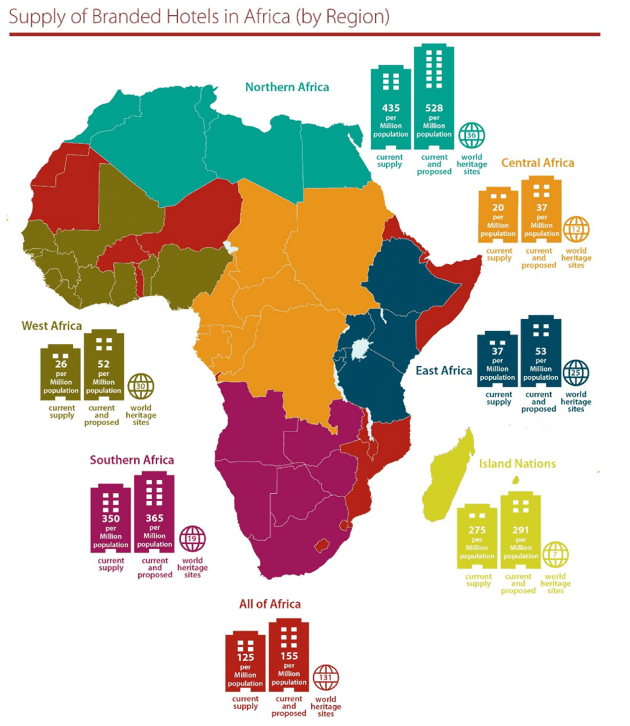