South Africa’s Tourism sector is entering its first serious crisis stage as Stats SA’s Q1 figures reveal a bleak 6% decline in total foreign tourist arrivals to South Africa for the period ending 31 March 2015. Grant Thornton Advisory Services attributes this decline to a number of factors deterring tourists from travelling to SA, including the Ebola pandemic in West Africa, economic decline in some source countries and the implementation of SA’s new immigration regulations.

“The 6% decline recorded in foreign tourist arrivals for the first three months of 2015 equates to a loss of 150 000 tourists, compared to the same period recorded last year. This is a decline of 1600 tourists – or four jumbo jets – per day,” says Lee-Anne Bac, Director, Advisory Services at Grant Thornton. “A loss of this magnitude in foreign tourist arrivals is unprecedented. We have never seen such dire levels of decline in the last 21 years of our tourism history.” See table below.

This all comes at a time when South Africa’s weak currency should be a factor that encourages foreign tourism.

Statistics South Africa (Stats SA) releases monthly foreign tourism arrival data. The report records total foreign tourist arrivals per month, by source country, purpose of visit and mode of transport. Tourist arrivals are defined as visitors who stay in the country for at least one night, excluding travellers who are in South Africa on transit. Tourists include holiday makers and business travellers.

Grant Thornton Advisory Services calculates the direct spend lost to the SA economy as a result of the 150 000 tourist decline, to be R1,6 billion. Bac adds that this loss of foreign tourists excludes the levels of growth that South Africa should have experienced during the same period.

“If we had experienced modest growth of 5% for the quarter, then the total number of foreign tourist arrivals to end March 2015 would have been 2,6 million. So, if we include the expected growth expectations in our estimations, South Africa actually lost 265 000 foreign tourists (and not 150 000) in the first three months of the year and therefore the loss of direct spend in our economy (Foreign Direct Investment) would have been R2,8 billion,” she continues. 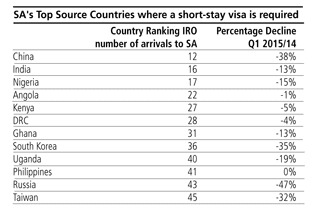 Bac says that during the first quarter of 2009, when the world was in deep recession, South Africa recorded a 2.5% drop in tourist arrivals for the same period.

“When comparing our recessional years to our current situation, it’s a big shock.”

South Africa has rarely experienced any decline in tourism arrivals since 1994. Small declines were recorded in the first quarter of 2004 (-0.8%) and there was a decline of 0.6% during the first three months of 2001.

“Based on global tourism forecasts for 2015, South Africa should not be experiencing these levels of decline” says Bac. “South Africa appears to be ‘bucking the global trend’ at the moment.”

She cautions that there will be far reaching implications resulting from this dramatic decline, and most notably a price squeeze will result as tourism product owners fight for a shrinking foreign tourism market and a price sensitive domestic market.

“There will most definitely also be job losses especially in niche tourism operators that focus on specific foreign tourism markets i.e. China and India,” Bac continues.

Bac adds that the recent Xenophobic attacks in South Africa are not to blame for the decrease in foreign arrivals because these only flared up towards the end of the first quarter this year, which was after the period under review.

“The decline could be attributed in part to the aftermath of the Ebola virus which affected West Africa,” says Bac. “But one of the other factors has to be South Africa’s new immigration regulations which now require foreign tourists who need a visa to visit South Africa to appear ‘in person’ and submit biometric data when applying for a Visa.”

The new Visa requirements, came into effect on 1 October 2014. But requiring biometrics as part of a visa application is a fairly standard request around the world.

“The problem with South Africa’s biometric visa legislation is that the infrastructure was not in place around the world when the law came into effect and communication around implementation and the requirements was unclear. This caused confusion and complications in the market,” says Bac.

“Some markets have retaliated because of this – and now South Africa is getting less marketing and brochure space in the travel advertising world as a result. The issue is not about submitting biometrics or appearing in person for a visa. It’s about the lack of systems to do so easily and simply.

When applying for a visa it’s often a tourist’s first point of contact with South Africa and it is important that we remain a welcoming destination.”

“At a time when the world is getting more ‘friendly’ with travel regulations, while maintaining legislative requirements where necessary, we seem to be going in the opposite direction with our disorganisation, lack of systems and added boundaries. One can only imagine what the new Birth Certificate legislation will do to our arrivals in the coming months, since its implementation came into effect on 1 June this year,” Bac concludes.