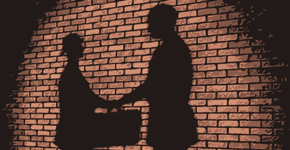 For the first time since the end of Apartheid, businesses will have to ask the government’s permission to operate. The wealthy elite can thank Minister of Trade and Industry Rob Davies for a new age of protectionism. The poor can thank him for a new age of oppression, exclusion, corruption and unemployment, writes Ivo Vegter.

The reaction to the Licensing of Business Bill, gazetted by Trade and Industry Minister Rob Davies gave the public only 30 days to become aware of this monstrosity and file comment. The draft is dated 18 March 2013, so by now, as the mafia would say, we’re shit outta luck.

You see, in 1991, in the early stages of the negotiations that led to the liberation of South Africa and the peaceful transition to freedom and democracy, a law was passed that abolished the Apartheid rules that required all businesses to seek government permits to operate.

The government of Verwoerd, Vorster and Botha used those laws to raise the barriers and costs for new entrants into the market, to curb the growth of the informal and small business sector, to limit where businesses where allowed to trade and what they were allowed to trade in, to harass those of whom the government did not approve, and ultimately, to enforce the racist segregation policies that benefited white, and particularly Afrikaans, business at the expense of the majority.

The law that liberated South African business was crafted by the Law Review Project and was known as the Business Act of 1991. For the first time, blacks were freely permitted to enter into business, and companies across the board were relieved of their bureaucratic straitjackets. Laws such as these were responsible, during the first decade of democracy, for South Africa’s rapid rise up the world rankings on personal, political and economic freedom.

However, that rise has stalled and reversed. On all the major indices of freedom, kept by such august bodies as Freedom House, the World Bank, the World Economic Forum, the Institute for Property Rights, and Transparency International, South Africa has been sinking like a stone in the most recent decade.

Mr Davies, it appears, is intent on completing the reversal to Apartheid-style government control over the entire economy. His draft Bill, published with the approval of Cabinet, will repeal the Business Act of 1991 in its entirety, along with all associated proclamations and regulations.

In its stead, everyone who proposes to do business of any sort, even if it is only to hawk home-grown mielies at a taxi rank, will have to ask the government for permission. A license will be subject to a fee, yet to be determined, administrative penalties subject to the discretion of bureaucrats, and ultimately, jail time of up to 10 years for conducting an unlicensed business.

Violations for which licenses may be denied, suspended or revoked range from relatively serious offences, such as causing riots or selling stolen property (including intellectual property such as branded clothing or entertainment), to the sort of bureaucratic laws that almost everyone, at some point, falls foul of, such as employing illegal immigrants or violating tax law. All are already illegal, under existing law.

Not daunted by the administrative failures at the former Cipro, now known as the Companies and Intellectual Property Commission, the Bill calls for an elaborate and expensive new register of all businesses to be maintained, containing full particulars of even the rats and mice.

Almost everyone with a government job title and a uniform is deemed to be an “inspector” under this law, from customs officials and police officers, to health and safety inspectors, and even traffic cops. Additional inspectors can be appointed by the minister, should this army not suffice.

These inspectors will have wide-ranging powers. Armed only with the “reasonable suspicion” that “a business is being conducted”, they will have the right to enter and search premises, investigate complaints, question anybody on the premises, confiscate goods (they “may” issue a receipt), summon business owners to appear before them, and shut down premises temporarily or permanently.

Of course, the Bill claims that all this is done to “promote the right to freedom of trade, occupation and profession and any rights contained in the Constitution,” and to combat illegal activities. Another purpose is to prevent illegal immigrants from being able to work or conduct business in South Africa, and to combat the sale of counterfeit merchandise and other unlawful products.

Here are just some of the harms the Licensing of Businesses Bill would cause.

It would vastly expand the potential for bribery and corruption. If I were an official with a penchant for lining my own pockets, I’d call this the Christmas Box Bill.

The provisions are so broad and vague, and the recourse for company owners so onerous and time-consuming, that all you have to do to land a generous pay-off, even from a perfectly legitimate business, is issue a threat. There is no check on your power to summon someone to your office, or turn up at their office with a squad of goons and a threat to search the premises, seize records and warehouse stock, interview disgruntled employees, or shut down the business while you “investigate” a “complaint”.

But the impact will be much broader than just making corruption child’s play.

Even if all the inspectors – that is, all the police, traffic officers, customs agents and sundry other civil servants – are public-spirited souls who are as honest as the day is long, the Bill can be abused in a myriad of ways.

Established businesses can and will use it as a sledgehammer against competitors, and especially against upstart competitors who haven’t yet learnt how to navigate the maze of red tape, or can’t afford entire “compliance departments” to manage the bureaucracy.

In fact, expect big business to back Davies and to support this Bill. After all, they can afford the cost of bureaucracy, and benefit from hurdles for their competition.

So if they do support it, don’t for a moment believe it will be good for any business other than their own, or that their motive is anything other than a venal desire to hurt competitors and kowtow to the bureaucrats who award them their tenders. There’s nothing wholesome about the cosy alliance between government officials and their business cronies, so it is unwise to take the cronies’ word for the desirability of a Big Brother law.

Besides competitors, this law will be useful to assorted racists, xenophobics and moralising Mother Grundys, who can all use it to shut down shops and traders of which they disapprove, on the flimsiest and most self-serving of grounds. Expect it to be war, especially at the small-business end of the market, where three-quarters of all hiring and half of all turnover takes place.

The cost of it all 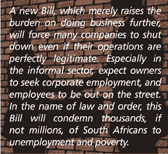 In the sluggish economic climate of today, it is already a scary prospect to risk your career and savings on starting a new business, in large part because of the bureaucracy associated with it. According to the SME Growth Index, a third of all small businesses reported that their survival has been threatened in the last year. It estimates that the cost of red tape is on average about 4% of turnover, which, at the margin, is more than enough to turn tentative profitability into certain bankruptcy for a small business. It also notes that it hits small firms more than twice as hard as big companies. “Red tape is thus particularly regressive and hurts those firms that are most vulnerable the most,” the report’s authors write.

Three-quarters of surveyed businesses said it has become more difficult for them to do business over the last year, and while they cited numerous reasons, more than one in five pointed to red tape, regulation and the cost of doing business as impediments to growth.

We can’t eat platitudes, and when faced with fines and even 10-year jail terms for not asking permission to make a living, sweet-sounding words are no consolation.

The National Development Plan has this to say about small business: “Some 90% of jobs will be created in small and expanding firms. The economy will be more enabling of business entry and expansion, with an eye to credit and market access. By 2030, the share of small- and medium-sized firms in output will grow substantially. Regulatory reform and support will boost mass entrepreneurship. Export growth, with appropriate linkages to the domestic economy will be critical in boosting growth and employment, with small and medium-sized firms the main employment creators.”

Not if Rob Davies gets his way. The Licensing of Businesses Bill must be fought, and it must be defeated. People who trade in illegal merchandise, violate municipal by-laws and zoning regulations, or employ illegal immigrants, can already be prosecuted under existing law. Sad to say, this onerous new Bill will join a growing list of repressive and regressive law proposed by a ruling party that once fought for our freedom.

Twenty years ago, a new, free South Africa dawned. Perhaps it was too much to expect daylight to last forever. So before my publican gets shaken down and closes up shop, I’m off to the pub for some sundowners!

Published with acknowledgement to the Daily Maverick – www.dailymaverick.co.za

About the Author:  Ivo Vegter is a columnist and the author of Extreme Environment, a book on environmental exaggeration and how it harms emerging economies. His book can be purchased at www.exclus1ves.co.za

More on the Business Licensing Bill

The Helen Suzman Foundation had this to say about the Business Licensing Bill (excerpt dated 09 May 2013) – Editor).

The Mises Institute of South Africa:

According to Lionel October, Director General of the DTI, advantages of this Billl are:

Business Unity SA (www.busa.org.za) believes that the Bill will unintentionally impede the growth and development of small and medium enterprises (SMEs) and further harm a sector with an already high business failure rate.

This is also worrying considering that most economists see SMEs as being the engines of growth in developing economies.

The Bill contradicts the National Development Plan (NDP), which sees 90 percent of all jobs by 2030 derived from the small enterprises sector.

What’s your view? Comment below and enter the draw for the ‘Article Discussions‘ prize