Editors note: World Lion Day, celebrated on in August each year, is an independent campaign working to highlight the importance of the lion globally and to raise lion conservation awareness worldwide. The article below is very relevant to this cause, as the death of Cecil the lion created an unprecedented awareness of lion conservation in Africa.

The killing of a satellite-tagged male lion by a trophy hunter in Zimbabwe in July 2015 provoked an unprecedented media reaction. In this paper, the authors provide a chronology of events following the death of a lion nicknamed “Cecil” and analyse the global media coverage of the event spatially and temporally. By David W. Macdonald, Kim S. Jacobsen, Dawn Burnham, Paul J. Johnson and
Andrew J. Loveridge.

The authors of this paper recruited a media monitoring company to explore patterns in both social and editorial media globally, regionally and by country.

All peaked at the same time, so there was no evidence that anyone platform was responsible for precipitating the spread of the story in advance of the others. The editorial and social media also peaked in synchrony, neither one being a forerunner or follower in the coverage of the Cecil story.

Instead, our results reveal a highly interconnected media universe: with the story going viral synchronously across media channels and geographically across the globe over the span of about two days. We consider whether the preoccupying interest in Cecil displayed by the millions of people who followed the story may betray a personal, and thus potentially political, value not just for Cecil, and not just for lions, but for wildlife, conservation and the environment. If so, then for those concerned with how wildlife is to live alongside human enterprise, this is a moment not to be squandered and one which might have the potential to herald a significant shift in society’s interaction with nature.

The number of articles in the editorial media mentioning Cecil the lion peaked at 11,788 on 29 July. There was remarkable global synchrony in this “spike”, so the world media appeared to respond as a globalised entity. We used media saturation, a relative measure of the number of mentions of the Cecil story, as a proxy for estimating the level of interest in the Cecil story.

Regionally, saturation levels were high in North America. Interest was also high in Australia and parts of South America and Africa. This opposes the common assumption that interest in the Cecil story was the prerogative of wealthy nations.

The social media response to Cecil’s death, was much larger than that in the editorial media in terms of the number of mentions of Cecil (87,533 mentions), but the time to the peak was very similar to that of the editorial media. We compared the development of coverage of the event in the three largest social media platforms (Facebook, Twitter and YouTube) to see whether they played identifiably different roles in the development of the story through time.

We found that, while there were clear regional differences in the level of media saturation of the Cecil story, the patterns of the development of the coverage of this story were remarkably similar across the globe, and that there was no evidence of a lag between the social media and the editorial media. Further, all the main social media platforms appeared to react in synchrony. This story appears to have spread synchronously across media channels and geographically across the globe over the span of about two days.

For lion conservation in particular, and perhaps for wildlife conservation more generally, we speculate that the atmosphere may have been changed significantly. 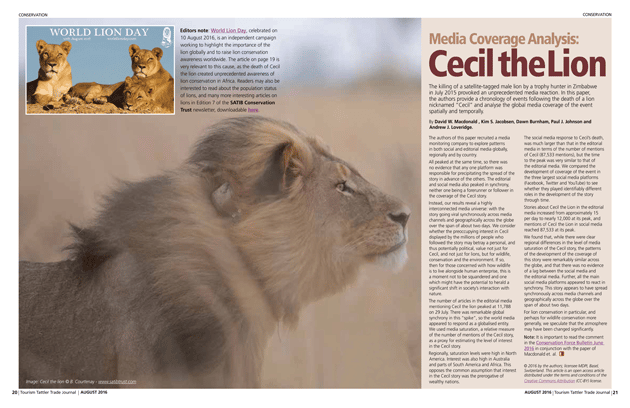