The third edition of the Carnaval International de Victoria held in Seychelles from 08 to 10 February has once again lived up to its reputation of being the ‘Carnaval des Carnavals’, writes Des Langkilde.

With twenty international groups and countries being represented in over sixty carnival float processions, including floats created by local businesses, the Seychelles police force and representatives from visiting Navy forces, the Carnaval lived up to the Seychelles motto of being a ‘melting pot of cultures.’

The first edition of this unique event took place on 04 March 2011, and, based on its success was followed with a second edition in March 2012. The 2013 edition however was moved to February as March conflicted with religious events that take place in the Seychelles, which is predominantly Catholic. 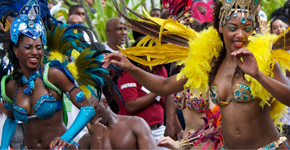 a (Cape Town and KwaZulu-Natal), Trinidad, Tobago and Zimbabwe.

This year’s Carnaval was jointly co-hosted by the Vanilla Islands of Seychelles, La Reunion and Madagascar along with Zimbabwe. During a press briefing at the Constance Ephelia Resort prior to the official opening of the 2013 carnival, an agreement was signed by the President of La Reunion, Mr. Robert Didier and the Seychelles Tourism Minister Alain St.Ange, which is aimed at formalizing cooperation between the two countries. As part of the agreement, hospitality students from La Reunion will be able to study at the Seychelles Tourism Academy with reciprocal student exchange programmes for on-site work experience at hotels in each country.

Judging by the increased popularity of this cultural extravaganza over the past three years, the Carnaval International de Victoria is set to become one of the ‘must see’ annual events in the international tourism calendar.

As Minister St.Ange says; “No Government should be ashamed to showcase their people and culture. The Carnaval de Carnavals is like a tourism trade fair, and remains the venue for Governments from far and wide, through their own Tourism of Culture Departments, to meet the large press fraternity, and fly their flags as their respective rich cultures is shown to the world. There can be no consolidation of tourism without culture and this message I am echoing from the heart of a tourism paradise, the Seychelles, where tourism remains the pillar of its economy”