Stand up comedian John Vlismas’s all-new show, “brain-dump” is running at The Pieter Toerien Theatre in Montecasino from 22 July to 12 August 2018. 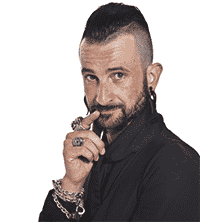 Vlismas is 45 years old. He’s been in comedy since Democracy was born. For decades, he drank everything he could get his hands on, and snorted anything granular, even ProNutro once. Then he stopped all that and decided that he would be better off reading quietly, building his tattoo collection and being a better father.

In between these important things, he still watches the world through his unique lenses. Once described by another (overweight) comedian as “proof that satan *cks rats”, Vlismas happily chews on the truth and spits it out as hilariously dark but happy anger, brutal honesty and vivid imagery.

His all-new show follows on the critical acclaim of “the Good Racist” – which filled the Teatro, the Lyric Theatre, The Fire & Ice Hotel – Cape Town and ran for six weeks at the Toerien Studio.

In his signature mix of intellect, outrage and reflection – “Brain Dump” promises to make you laugh loudly about the most lethal process ever…life – while thinking deeply about your position as an over-confident and decomposing ape on a rock, flying around a nuclear reactor for no real reason.

Vlismas has researched the human brain for this show – and tries to answer some of the most burning questions ever asked – for example – “if we’re all great apes, why isn’t sex with each other bestiality?”

“The show is about this dysfunctional processor between my ears – it’s a ridiculous piece of equipment that shouldn’t exist – but it does. We spend our whole lives trying to understand it, and then we die – that is not a result,” says a beaming Vlismas, “We may as well test the boundaries and see what this bastard can do before we’re all gumming our toast and smelling of mothballs and pee.”

Tickets are available from the Box Office at Montecasino, and through Computicket. The show runs from Wednesday – Saturday at 20h00, with a Saturday Matinee at 16:00 and Sunday Matinee at 15:00.

Hotel App to be Launched at ITB Asia 2017