Billions of rands are being invested into South Africa by Chinese corporations, trade delegations are coming and going on official visits, and interest in South Africa is on the rise in terms of tourism. By Enver Duminy, CEO, Cape Town Tourism.

SA Tourism recently convened four workshops attended by Cape Town Tourism across China in order for SA suppliers to showcase their products and update the Chinese market on new offerings. These workshops involved 420 agents, and provided significant networking opportunities, allowing for the creation and consolidation of new business and trade as well as boosting confidence in SA among outbound operators and travel agents.

According to “The Future of Chinese Travel” report by InterContinental Hotel Group, South Africa is amongst the top 15 destinations for Chinese tourists with Gauteng being the second most popular city in the MEA region for Chinese travellers. South Africa is also amongst the top 15 destinations in terms of the Chinese share of total travel spending, which is expected to grow from US$0.5 billion in 2013 to more than US$3 billion in 2023.

In South Africa, the Chinese outbound tourism arrival has reached 84 878 in 2015, increased by 2.2% YOY. If it wasn’t for the visa regulation plunge, it would be much higher.

The distance from China to South Africa is approximately 12,000km, which means it take at least 15 hours to travel between the two countries by plane. Despite the distance, Chinese restaurants, China Malls, and Chinatowns are everywhere in South Africa. Research conducted in 2010 shows there are over 500,000 Chinese people in this country, according to Dr Yoon Jung Park, the coordinator of the Chinese in Africa/ Africans in China International Research Working Group at Rhodes University.

China is now South Africa’s largest trading partner both in exports and imports, with trade between the two countries over R100 billion. By the end of 2015, South Africa and China had signed 26 agreements worth R94 billion.

Every month, more than 14 000 Chinese tourists, most of whom are UnionPay card-carrying members, visit South Africa. On average a Chinese tourist spent $6 200 (nearly R100 000) on a 10-day trip. In the year of 2015, 77 936 UnionPay transaction was made, 70% was ATM cash withdrawal and 30% POS purchases. Total transaction volume valued to 223 million RMB (equivalent to 496 million Rand), categorised by 45% in diamonds and jewellery, 35% in retail shopping and the remaining 20% in destinations visiting, hotels and transportation.

Since the workshops took place in different cities across China, disparate preferences were discovered. Visitors from Beijing have different expectations from those in Xi’an.

Beijing is considered a tier-one market city as there is general awareness of SA: 40% of agents in Beijing are new to selling SA and Cape Town as a destination, but agents have been exploring the country on personal visits which have allowed for some exposure. They have returned to China with positive reports.
They are most likely to come on package tours, and know about Tsogo Sun & Sun International, travelling by Air China and Cathay Pacific. Typical travel schedules are from Johannesburg to Kruger and Sun City to Cape Town. They stay 10 days in SA, 4 of which are spent in Cape Town (for leisure travellers in particular). Top months are Jan – Feb (the Chinese New Year) and May – June (annual holidays). Beijing business travellers travel any time of year with fewer restrictions, enjoying golf, wine and cultural experiences.

Also a tier-one city, Guangzhou enjoy luxury travel, including visits to top restaurants like the Test Kitchen, retail experiences, and visits to top attractions such as Table Mountain and Cape Point. They are typically corporate visitors who come to Cape Town in July and stay for five days. They are considered high-end consumers. The majority of agents in Guangzhou use SAA and Qatar Airlines. For more information visit www.thousandwonders.net

As a tier-two city, agents in Xi’an needed more awareness made of SA’s products and attractions, however, this is a high end consumer market base not interested in packaged tours.

Interest was expressed in the following angles: Westernised gourmet food, local and domestic flights – private jets if possible, adventure experiences such as abseiling, hiking and whale tours and a huge interest in Cape Town’s Jazz Festival, Carnival, Fashion Week and Marathon. Preferred airlines include Air China via Hong Kong and an air access opportunity would be via Kenya Airways – fly direct to CPT – Kenya.

Hangzhou is another smaller city that is getting to know South Africa and Cape Town. Quite a few agents have visited, and visitors from that city are high-end consumers, but more likely to book as groups rather than as individuals. They expressed an interest in self-drive tours from Cape Town into the Western Cape, and would like to take part in adventure activities such as snorkeling with seals, paragliding from Table Mountain and bicycle tours. As with the other cities, Hangzhou visitors would like to see the Big 7: Robben Island Museum, Kirstenbosch, the City Walk, Cape Point, Groot Constantia, Table Mountain Cableway and specifically V&A Waterfront. Local businesses that are already active within the Chinese Market that attended the workshops included luxury hotel groups and tour companies, while other key players included exclusive jewelers such as Shimansky and First Diamonds and attractions such as Cape Point and V&A Waterfront, both of which maintain a presence in China.

As with any potential market, the key is to keep the destination at top of mind for agents.  Adding value through consistent introduction of new products and reinvention of older ones will ensure that there’s always something fresh on offer to visitors. 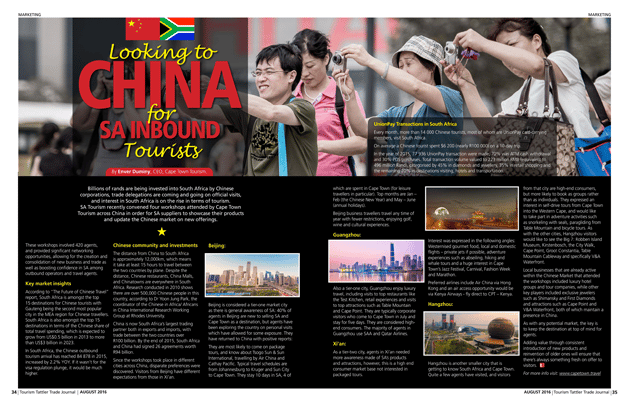 Who is the South African Millennial?