Travel and Transport Between Turkey and the Greek Islands

Greece is known for its many beautiful islands but did you know that the cluster known as the Dodecanese Islands, located in the Aegean sea, is just a short distance from Turkey’s western coast? Island hopping, not just between the Greek Isles but also between Turkey and Greece has become very popular and with frequent ferry services connecting most of the islands to Turkish resort towns, travelling between the two countries is very easy to do.

Of course, when you actually arrive in either Turkey or at one of the following Grecian islands, affordable car hire is readily available so that you can visit the many attractions. 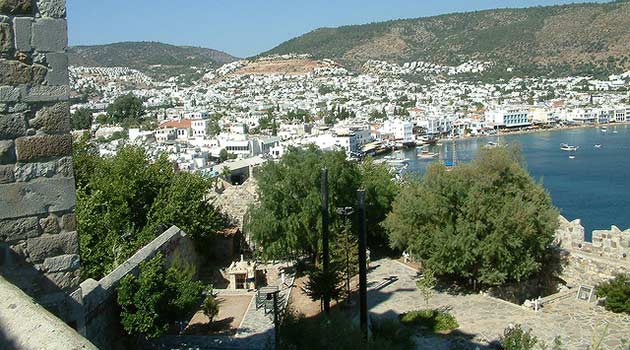 The view over Bodrum bay from St. Peter Castle. Image via Flickr by Tevfik Günyüzlü.

Located on the edge of a peninsula between the Aegean and the Mediterranean seas, Bodrum has a charming old town lined with whitewash houses and cobblestone streets. The city is best known for its impressive seaside castle and vibrant nightlife. During summer the streets of the town fill up with live music, students and holidaymakers who party till sunrise and spend their days relaxing at one of the peninsula beaches. In the entrance of Bodrum’s bay is the Greek Island of Kos, one of the most popular of the Dodecanese Islands. You can travel on the morning ferry from Bodrum and spend hours exploring the pretty harbour town and castle, grab a Greek salad and sip a glass of wine on the waterside promenade. Kos is also known for having lively nightlife and staying a night or two on the island will let you enjoy the bars and clubs. There are also ferries running from Kos to most of the other Aegean Islands including Rhodes, Mais, Leros and Patmos, so you can continue island hopping.

If staying in the bustling resort of Bodrum doesn’t appeal to you there are a handful of smaller towns and villages spread about the peninsula. Turgutreis is a charming town with elegant seaside restaurants along Sunset Beach and a street of artisan shops. A Turgutreis to Kos ferry runs every day throughout the high season. 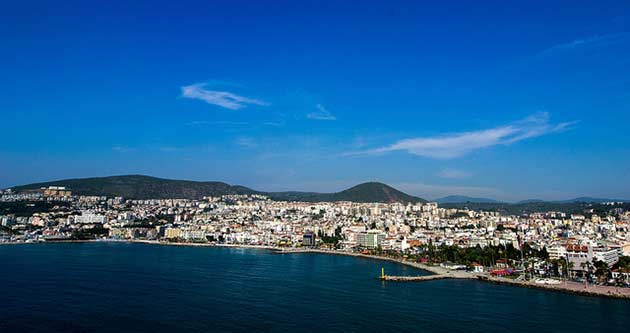 The port in Kusadasi Turkey. Image via Flickr by jpitha.

Kusadasi resort town is the best place to stay for exploring the Aegean coastline. Within an hours drive, you can reach the pristine beaches of Dilek National Park, home to forest hiking trails, seaside hamlets and the mysterious Cave of Zeus. Heading inland you can also journey to the traditional town of Selcuk where the 2,000-year-old ruined city of Ephesus stands alongside the Temple of Artemis and the House of the Virgin Mary. The town centre hosts many luxury hotels with rooftop bars, and elegant fish restaurants while a pretty seaside promenade leads to Ladies Beach and the harbour where cruise ships dock and ferries depart for Samos. 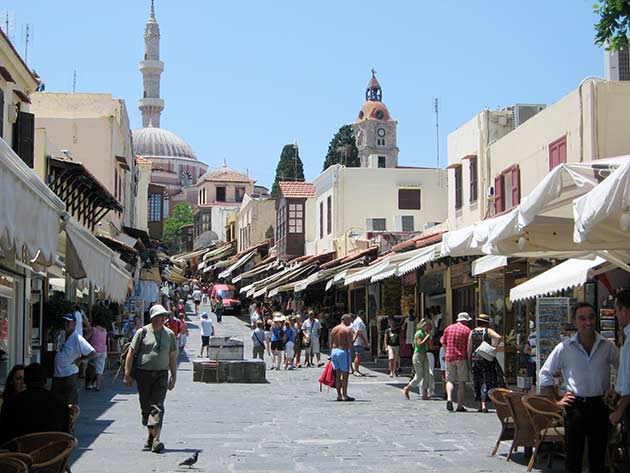 The tranquil town of Rhodes.

The harbour town of Fethiye is only a 90-minute ferry ride from the largest of the Dodecanese Islands, Rhodes, and the medieval town can be explored in one day. However to make the most of the stunning beaches and visit the many archaeological sites that Rhodes has to offer, purchasing an open return ticket and staying for a few days would be a better option. Some of the island’s top attractions are the acropolis of Lindos, St. Paul’s beach and the Seven Springs. There is plenty to see around Fethiye too, from the historic Ghost Town of Kayakoy to the famous Blue Lagoon at Oludeniz and the hidden Saklikent Gorge, so this is a good place to base your vacation if you prefer to make day trips then island hop. 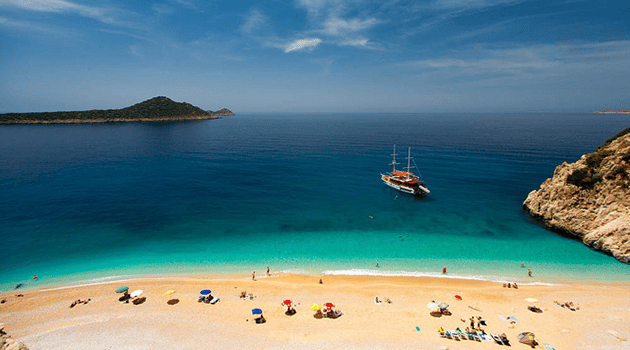 An idyllic beach in Kas Turkey. Image via Flickr by Taner Ragıpoğlu.

Along the turquoise coast is a small harbour town, once a simple fishing village, Kas is now a thriving town, a major stopping point on Blue Cruises and one of the gateways the stunning Kekova region where you can find the clearest water and best scuba diving opportunities of the entire Mediterranean coastline. Despite its tiny size, Kas receives a huge number of tourists throughout the summer months and many visitors take advantage of the town’s proximity to the Greek Island of Mais. At just 20-30 minutes by ferry, it makes a pleasant day trip from the town. You can either book tickets online with Alaturka Turkey or stop by one of the two company offices in the central square.

The island itself is quite large but most homes and attractions are located around the harbour so a half a day will be plenty of time to visit one of the beaches, swim in crystal clear rock pools, sunbathe and stroll through the shops and restaurants on the side of the bay. If you’re feeling energetic you could also hike up the 400 stone steps to the top of the island, walk to the hilltop castle or take a dinghy to the opposite side of the Mais to explore inside a mysterious blue cave before jumping on the afternoon ferry back to Turkey.