Celebrity Chef Citrum Khumalo and the BON Hotel Group have announced that their new venture, Asidle Culinary Kitchen and The Black Pepper Bar, is officially open. The culinary school, CPSH School of Hospitality, coined as Africa’s premium culinary and hospitality skills development centre by Chef himself, was launched earlier this month at a celebratory ceremony attended by business people, government officials and celebrities.

Located at the refurbished restaurant venue (previously Viva Espana) at BON Hotel Midrand, the culinary school–cum-restaurant is the result of a desire to bring young African chefs into the industry. Khumalo envisaged expanding his internationally accredited culinary school to “give young chefs the ultimate culinary learning environment – a ’live’ operating restaurant where patrons could taste a wide variety of foods.”

Students will be exposed to the skill of Chef Khumalo who comes with a host of accolades – celebrity chef, owner of the CPSH, President of African Chefs United and The Culinary Arts Association of South Africa (CAASA). He has prepared meals for Nelson Mandela, Brad Pitt and a host of other local and international celebrities. As many will tell you, Chef Khumalo demands perfection and it is this standard that has made him one of the most sought-after Chefs in Southern Africa. His obsession with skills development, especially with the youth, has bestowed almost a “Hell’s Kitchen” type of teaching style and it is this style which will eventually shape the new restaurant.

BON Hotels have facilitated and provided the venue and equipment. Charl van Wyk, Operations Director at the BON Hotels Group, took to the concept immediately and spearheaded the initiative by the provision of the restaurant which adjoins and services BON Hotel Midrand Conference Centre. “We are delighted to have Chef Khumalo and his team to enhance the customer experience here at BON Hotel Midrand,” he states.

Driven by attracting tourists to experience African hospitality, the main restaurant will provide a wide variety of top South African food offerings, including the traditional and very popular “shisanyama” experience, and the Black Pepper Bar will be hosts to jazz nights, comedy hours and township-based entertainment groups.

Asidle also serves an a la carte lunch and offers an Uber-like delivery service to the neighboring area. The restaurant and bar have capacity to host up to 400 patrons, making it a popular choice for private parties and functions. Chef Khumalo promotes the versatility of the venue as being able to host themed nights backed by the ability to customize menus to suit both client and student.

Addressing attendees at the launch function, both parties echoed that the focus of CPSH School of Hospitality and Asidle will be culinary skills development, centred on exposing young, aspirant chefs to top training and equipping them with an excellent skill set to develop their careers. 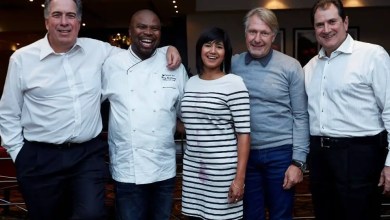