The decision by South Africa’s Economic Development and Tourism MEC for KwaZulu-Natal, Michael Mabuyakhulu, not to be deterred by the response from environmentalists and to extend the scope of the proposed Berg cableway into Lesotho and the Free State has much to commend it. By Rob Haswell.

The prospect opens up the possibility of improving access to The Amphitheatre, one of the finest view sites in the world.

This article aims to:

One of the many challenges in our country – where entry to parks, beaches, recreation areas and reserves was until recently denied to the majority – is to serve the needs of, and provide access to, 50 million people rather than four million.

We are a multicultural nation – a mosaic of beliefs, traditions, norms and value systems. And we now live in a constitutional democracy, in which equality and fairness are enshrined.

Accordingly, limiting access to only certain people, such as climbers, hikers and campers, goes against our constitutional grain, even if we are dealing with a World Heritage Site.

Preserving the Berg for a limited, specific type of person is short-sighted; it does little to build a new nation, which Nelson Mandela did so much to foster and which is one of the goals of the National Development Plan.

This is not to advocate an open-floodgate approach, but to maintain that a carefully planned and managed cable car access to the Berg is not anathema, and would not spell the end of the Berg as some of us know it. After all, the park covers 242 813 hectares.

The park is flanked by some of the poorest, most degraded areas in South Africa and Lesotho. The lack of employment, and the overcrowding of people and livestock, is glaring on the South African side, while the altitude and sparse grazing in Lesotho ensure a tough life for the inhabitants.

In the case of the uKhahlamba Drakensberg Park, then, for the adjacent communities the grass is indeed greener on the other side.

It is an untenable result of colonial and apartheid policies, and the desperate need to create permanent employment opportunities has to be acknowledged. Any project aimed at that must get a fair hearing.

If South Africa, especially our reserves and heritage sites, truly belongs to all we have to increase accessibility, mitigate environmental impact and spread the economic benefits more broadly and equitably than is the case now.

Hopefully, this cursory overview suggests a cable car project – which provides controlled access to the top of the Berg and creates substantial and sustainable employment and empowerment opportunities to communities on both sides – is warranted and desirable.

Based on the principles outlined, I propose that careful consideration be given to a cable car to replace the chain ladder access to the top of The Amphitheatre. In this way you are not creating a new access point, but improving an existing route.

You can now drive to Witsieshoek via Phuthadijhaba, the capital of the former Qwa Qwa homeland, within the Free State.

At Witsieshoek there is a mountain lodge and a car park. A contour path of 7.5km leads past The Sentinel, one of our most impressive peaks, to a 40m cliff face that can be ascended and descended using two chain ladders.

Although correctly described as the easiest way to get to the top of The Amphitheatre, it is not for the unfit or faint-hearted, and the return trip takes at least five hours.

The chain ladders can be replaced by a cable car, if not an escalator, and golf carts could ferry people on the current walking path.

The Amphitheatre is more than 5km long and enables you to look down on the upper reaches of the Thukela Valley 1.8km below.

The Amphitheatre also contains the source of the Orange River, near the well named Mont Aux Sources, one of the highest points in southern Africa. For once, the use of the adjective “awesome” is fitting when you stand atop The Amphitheatre.

Upgrading the R74 Free State provincial road and foot path, replacing the chain ladders, and building pathways and safe viewing areas on top of The Amphitheatre would cost much less than a Berg cable car.

Many jobs for drivers and guides would be created.

A visitor centre, containing a restaurant, curio and souvenir outlets could be built near the car park.

The accommodation facilities in Witsieshoek would need to be improved and expanded, thereby creating management and ownership opportunities.

The proposed project area is where Lesotho, the Free State and KwaZulu-Natal meet, so it should be conceived as a trans-frontier initiative, with opportunities for Lesotho residents being an integral component.

Improving access to the Afriski Resort in Lesotho is also desirable. Given that the car park lies within the Free State, with the summit of The Amphitheatre managed by KZN Wildlife, revenue would accrue to both provinces.

Visitor numbers to the nearby Golden Gate National Park, and Clarens, would probably increase, as the cable car adds a new, world-class experience and tourism product to this tucked-away corner of South Africa.

Another possible spin-off for KZN, in addition to breathing new life into the stalled Nondela Golf Estate, could be the rebuilding of a hotel in the Royal Natal National Park. In any event, revenue from the cable car would certainly assist conservation efforts in the province.

The variable Berg weather is a positive from a tourism perspective as visitors would be well advised to stay overnight, to ensure they gain access to the top.

On a clear day the view across KZN, along “The Barrier of Spears”, or in winter across the snow-blanketed Malutis, is undoubtedly one of the finest.

It deserves to be seen and appreciated by all South Africans; it is an integral part of our natural heritage and could well become a must-see attraction for international visitors – most of whom now go to the Kruger National Park or adjacent game reserves and make a beeline for Cape Town, where the Table Mountain cable car is a major attraction, then fly out, without sojourning in Lesotho, the Free State or KwaZulu-Natal.

For that reason alone, the MEC’s revised proposal, and hopefully The Amphitheatre component, warrants a detailed environmental and economic assessment, and could be considered for government funding, as a nationally important infrastructure project, which would attract private investment in associated tourism activities and create additional, permanent employment. 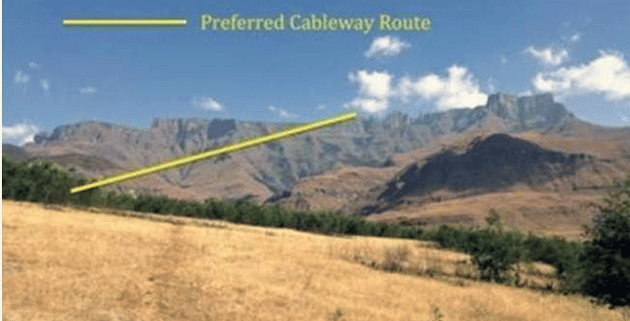 Gauteng Institute for Architecture partners with the Arts