CAPE TOWN, 16 October 2018 – Steeped in history as one of the oldest properties on the Atlantic Seaboard, the iconic President Hotel celebrates two decades since its namesake; former President Nelson Mandela reopened its doors in 1998 with a fresh facelift highlighting the Mother City’s finest attributes. 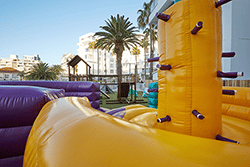 This independent hotel that once welcomed guests such as Lady Anne and Andrew Barnard, secretary to the Cape Government in 1797, offers guests an authentic experience of its hometown; from the farm-to-table food and drinks to its unique positioning in sought-after Bantry Bay, surrounded by Cape Town’s top attractions. The hotel debuts its renovations this October, complete with a new Kiddies Play Area, Reception, The Point Lounge and Deck, Owners’ Lounge and Deck Bar, and refurbished rooms.

Interior Architect, Justin Raath spearheaded the hotel’s redesign, putting a modern spin on African cultural influences with bespoke finishing and sustainable details. The story of the design is intended to communicate authenticity by being true to the hotels’ history, considering all material used and lastly, bringing the space to life with kinetic furniture and art pieces. The design narrative starts with the fact that the President Hotel is a landmark, “my wife used to come here 30 years ago for lunch from Somerset West, my colleague got engaged here 20 years ago – this hotel is an establishment, embedded with decades of memories,” shares Justin. The goal was to rejuvenate the hotel and re-establish it as the favourite breakaway experience for locals and visitors alike.

The President Hotel’s new features incorporate an air of the landscapes and rich history of Bantry Bay and the Western Cape, now with new life breathed into it. From the locally sourced, modern lamps illuminating each bedroom, to the hand blown, glass beaded screen in reception that takes its heritage from traditional African cultures, each space’s attributes have been considered – ‘what should be included, and why.’ In line with the standards of today’s sophisticated travellers, the hotel features multi-functional and tech-driven elements such as wireless chargers in the waiting area and a new group’s arrival area that can be doubled into a cinema room where HotelFlix, the hotel’s new in-room streaming service, can be cast onto a screen.

The use of neutral floor finishes and soft ambient lighting will welcome guests to each of the hotel’s six floors, opening up to an urban gallery of the Western Cape’s finest features and destinations. Taken by local photographer, Sacha Specker, each floor will showcase a different theme of photo art including landscapes, ocean, fauna, flora, culture, and Madiba. 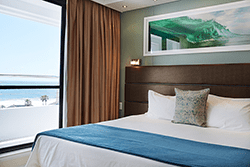 Catering to the world-class experiences the Western Cape holds, Justin drew his inspiration for the design directly from hotel guests. “I would come in and listen to what visitors were planning for their day here in Cape Town. The range of world-class choices on our doorstep was mind-blowing – anything from wine tasting in Franschhoek to big game viewing in the Karoo and shark cage diving in Gansbaai. You could be in semi-desert one day, snow the next and subtropical forest thereafter – the Western Cape is uniquely spectacular and we wanted to tell its story.”  Large-scale wallpaper photos will adorn the corridors with tags indicating where each photo was taken, as well as beautiful wooden framed images in the individual rooms and suites, freshened with soft paint tones, and complete with high-impact accessories.

The sequence of images features a unique story of the Mother City, which was captured along 1 000kms of land and sea by Sacha. With the aim of providing guests with a diversified perspective on their surroundings, the photographer ventured to distinct corners of the province including the rugged crags of the Cape Fold Belt and Cederberg Mountains, wide ranges of the Karoo, and into the shores of the Atlantic and Indian Oceans. “While only a small fraction of the incredible sights and destinations you can experience, each piece will provide a window into the opportunities one can have in and around Cape Town,” shares Sacha. “We hope they inspire guests to go out and experience these incredible places for themselves.”

At The President Hotel, guests will not only be able to get a glimpse of the city at its finest, but also access it with their unique location – nestled in-between the pristine beaches and vibrant city, and through curated tours and travel experiences that reach the sites captured in the photos. “Today’s travellers crave authentic experiences rooted into the places they visit. Our goal was to update the President Hotel’s spaces and offerings by developing an interconnected design that reinterprets leisure in a modern way and pays tribute to our incredible city and surroundings,” adds Jeremy Clayton, Shareholder and Manager of the hotel.

1766 The Society House is built

1998 The newly built President Hotel is opened by Nelson Mandela