A Chinese property company has pledged to build South Africa a new financial hub. Shanghai Zendai has unveiled plans to transform Modderfontein, a manufacturing district in eastern Johannesburg, into a multi-use financial centre “on par with cities like New York… or Hong Kong,” said Zendai chairman Dai Zhikang. The firm said it will spend about $7.8 billion on the development over the next 15 years.

The development—which has yet to be named and will include some 35,000 houses, an education centre, and a sports arena—marks a departure from past forms of Chinese investment in Africa, many of which have drawn criticism. Over the past decade, state-owned and private Chinese firms have been building African roads, railways, ports and other infrastructure in exchange for access to minerals and oil—a relationship that’s led some to call China a “neocolonialist.” Chinese state oil firms now face resistance from their former partners in Niger, Chad, and Gabon.

As a result, Chinese leaders have been paying lip service to investment that brings more direct benefits to African countries in the form of jobs or support of non-resource related industries. It makes sense then that Zendai stressed what the financial centre would bring to Africa’s largest economy: jobs for 100,000 people and a hub for Chinese investment in Sub-Saharan Africa. Zendai says 70% of housing in the complex will be reserved for black middle-class families. 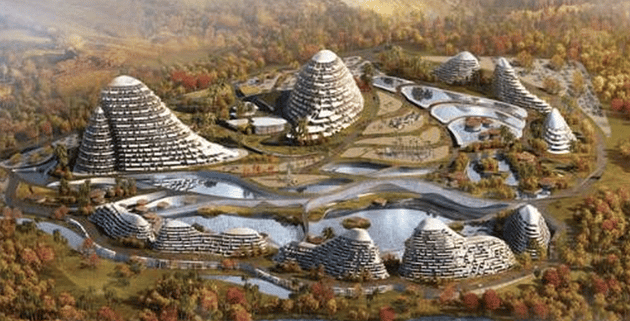 A visualization of the development by Zendai. AECI