SOUTH AFRICA, 19 July 2018 – Mango Airlines has been presented with the most sought-after award in the aviation industry. The Skytrax World Airline Awards – often referred to as the “Oscars of the aviation industry” – has announced that Mango is the ‘Best Low-Cost Airline’ of 2018 – a victory that spans the entire network of African airlines. 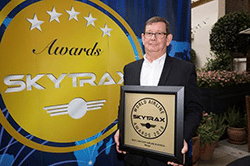 “We could not be more thrilled with this outstanding achievement. This has been the culmination of our continued hard work and dedication over the years to excellent customer service. This also speaks to our level of consistency to service excellence throughout our customers’ travel journey. It is a significant pat on the back for us to see our employees’ hard work being recognised on our continent, and around the world, particularly in light of the strong competition in our category,” explains Nic Vlok, Acting Chief Executive Officer of Mango Airlines.

The World Airline Awards (Skytrax), now in its 18th consecutive year, are the epitome of excellence in the aviation industry and illustrate a vote of confidence from millions of global travellers annually. Travellers across the world voted in the largest airline passenger satisfaction survey to decide the award winners.

The customer voting processes and awards analysis were independently assessed in 2015 and found to be compliant, transparent and independent. Over 100 customer nationalities participated in the survey with 20,36 million eligible entries counted in the results.

“Our guests have come to expect only the best from Mango. This award will only motivate our entire organisation to do better and hope to make it three in a row next year,” concludes Vlok. Mango is a multi-award winning airline (over 50 awards), and most recently it was voted by the Sunday Generation Next as the highest ranking Low-cost Carrier in South Africa.