O. R. Tambo International Airport officially marked the start of the peak holiday season on 27 October 2017 as it officially switched on the airport’s festive lights display and simultaneously celebrated the 100th birthday of the icon whose name the airport has carried for 11 years. 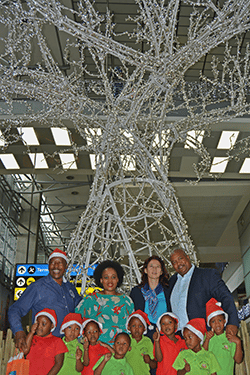 O.R. Tambo International Airport’s management team hosted more than 30 children from the Sinethemba Day Care and Mpumi Day Care from Phola Park in Thokoza, which are both located in communities near the airport. The children gathered around the airport’s Christmas tree as the General Manager of the airport, Ms Bongiwe Pityi, proceeded to officially switch on the Christmas tree lights which then officially marked the ushering in of the festive season at the airport.

“We are passionate about sharing this special occasion with children from within the local community. At the same time, it is important that we highlight to passengers and travellers that we are preparing ourselves for the busiest period of the year. Ensuring that children from nearby communities experienced this remained a key focus so that they too get to experience the airport in a special way,” says Leigh Gunkel-Keuler, spokesperson for O.R. Tambo International Airport.

Gunkel-Keuler noted that the summer holiday period remains the busiest time of the year for Africa’s largest airport which processed more than 3.5 million passengers last December and January alone.

“A tremendous amount of planning goes into ensuring that we, as part of the airport community, which consists of airlines, ground handlers and retailers, amongst others, are fully geared to cope with additional demands that come with higher volumes of passengers and airport users over this festive season,” says Gunkel-Keuler.

The airport is also running a major festive campaign over the month of October in conjunction with its retail stores. The 100For100 campaign will see one visitor to the airport win an R100,000 airport shopping spree. To enter, visitors to the airport simply need to spend R100 or more at participating airport stores and restaurants in one day and complete the entry form.

“Our retail footprint is similar in size to shopping malls and we wanted to join retailers in creating a holiday season buzz around their offerings, many of which are unique to the airport,” says Gunkel-Keuler.

Gunkel-Keuler hopes that travellers will also remember that the festive period is a particularly appropriate time to do something positive for those less fortunate and for companies to give back to communities where possible.

O.R. Tambo International Airport also has some special words of advice for passengers travelling over the festive season: