Despite a stronger finish for South African tourism statistics in the final quarter of last year, overall SA tourist arrivals are down -6.8% for 2015, compared to those arrivals recorded during 2014.

Lee-Anne Bac, director: Advisory Services at Grant Thornton says: “Tourism arrivals only grew by 7.5% during 2014 which in effect means that 2015’s negative performance has wiped out two years’ worth of vital tourism growth.”

Bac did emphasise that while significant losses were recorded during the first nine months of 2015, it was the final quarter of the year – from October to December – which helped to “save” South Africa as significantly improved statistics and data was recorded.

According to Grant Thornton’s analysis, for the 2015 year, South Africa experienced its biggest loss from African tourists where a decline of -7.3% was recorded, compared to +9% growth recorded during 2014.

“It is interesting to note that African air arrivals – those African tourists who enter South Africa via an airport – increased by 1.8% in 2015,” continued Bac. “But this then highlights even greater losses experienced in the number of land border African arrivals over the past year.”

Overseas tourists to South Africa, which are defined as visitors who are citizens of a country outside of Africa, declined by -4,9% in 2015.

“The overseas tourism market stabilised notably during October (-0.1%) following a disastrous first nine months of the year,” adds Bac. “This recovery showed even greater improvements with +6.4% recorded for November and +6.0% for December 2015.”

When analysing the overseas tourism figures for 2015, Grant Thornton’s data highlights that the -4.9% decline has unfortunately eroded all of the meagre gains achieved during 2014 (2.9%) and even some of the growth achieved in 2013 (4.5%). This equates to nearly 2.5 years of growth in overseas tourist arrivals lost over the past year.

South Africa experienced significant losses in terms of tourists from China during the first seven months of 2015 but remarkable growth during the final four months of last year saw Chinese arrivals ending +2.2% higher than those recorded during 2014.

“It’s important to remember, though, that 2014 was a disastrous year for arrivals from China with a -23% decline recorded in overall tourist arrivals,” says Bac. “This highlights that we have a long way to go to make up for these losses. However, based on arrivals in the past four months, we are extremely hopeful that new records can be achieved quickly to bring us back on track in terms of this very important market for our nation.”

“The past year has been extremely tumultuous for the tourism sector and various economic and social issues both at home and in some source countries coupled with immigration amendments caused great concern. However, one thing is for certain, much of this is now behind us and South Africa’s tourism sector is resilient. Recent changes to travel laws and the sheer nature of this industry will hopefully help it to rebound from its current decline in the months and years to come,” Bac concludes.

Note:
Definitions:
• A tourist is defined as an overnight, foreign visitor, and excludes same-day travellers, transit travellers and work seekers.
• When reference is made to a traveller, this would be foreign tourists PLUS same-day travellers, transit travellers and work seekers
(FYI: when Dept of Home Affairs put out their press release earlier this year about numbers being up in December 2015, they were referring to Travellers and not Tourists).
• An overseas tourist is a visitor who is a citizen of a country outside of Africa
• An African tourists is a visitor to SA with citizenship of an African country
• African Air-Arrival tourists are African tourists who enter SA via an airport (and not across land-borders).

About Grant Thornton International Ltd
Grant Thornton is one of the world’s leading organisations of independent assurance, tax and advisory firms. These firms help dynamic organisations unlock their potential for growth by providing meaningful, forward looking advice. Proactive teams, led by approachable partners in these firms, use insights, experience and instinct to understand complex issues for privately owned, publicly listed and public sector clients and help them to find solutions. More than 40,000 Grant Thornton people, across over 130 countries, are focused on making a difference to clients, colleagues and the communities in which we live and work. “Grant Thornton” refers to the brand under which the Grant Thornton member firms provide assurance, tax and advisory services to their clients and/or refers to one or more member firms, as the context requires. Grant Thornton International Ltd (GTIL) and the member firms are not a worldwide partnership. GTIL and each member firm is a separate legal entity. Services are delivered by the member firms. GTIL and its member firms are not agents of, and do not obligate, one another and are not liable for one another’s acts or omissions. 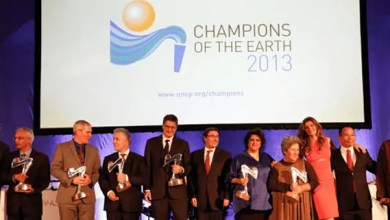 Nominate Your Champions of the Earth 2014