As with the already-famous range of fine, roof-liftin’ ‘shines, Prohibition Craft Gin and Prohibition Pink Gin are handmade in small batches – distilled to fine spirit from carefully selected grains.

“Prohibition was a ban imposed on liquor through the campaigns of America’s ultra-conservative Temperance Movement of the early 1900s,” says Silver Creek Craft Distillery founder and chief distiller Mark Taverner. “The ban in 1920 created a very fertile environment for the illegal liquor trade and many entertaining tales of gin-making by the light of the moon and lively underground speakeasies. Business flourished for gang bosses and the likes of Al Capone made a fortune during this time. By today’s measure, it is estimated that he would have been worth over R16-billion.

“Prohibition only lasted for 13 years, ended by overwhelming objection. As you can imagine, this was time to party and everyone rose to the occasion. To this day, its death knell in 1933 is widely celebrated. “To salute those who fought so gallantly to have the law revoked, our Prohibition Gin is made in the same traditional style as back then,” says Mark. “We like to think of this particular style of gin as helping folk dance since 1933!”

In setting off on the gin trail, Silver Creek’s distillers put their minds to making a clear craft gin in the New World style – fresh, crisp and happy; not too dry and infused with traditional botanicals of juniper, coriander, lemon, angelica and cinnamon. “These would have been used in the time of Prohibition,” says Mark.

The resulting Prohibition Craft Gin, bottled at 43% alcohol, is a versatile spirit ideally suited to be further enhanced with botanicals, fresh fruit and herbs and good quality craft tonics. In the glass, Prohibition Craft Gin offers the immediate impression of balance with a fresh, crisp burst of citrus followed by lingering juniper and a hint of cinnamon. Citrus is again prominent on the dry palate, gently supported by the taste of juniper. The finish is defined by a crisp, clean smoothness that lingers with an earthy character. 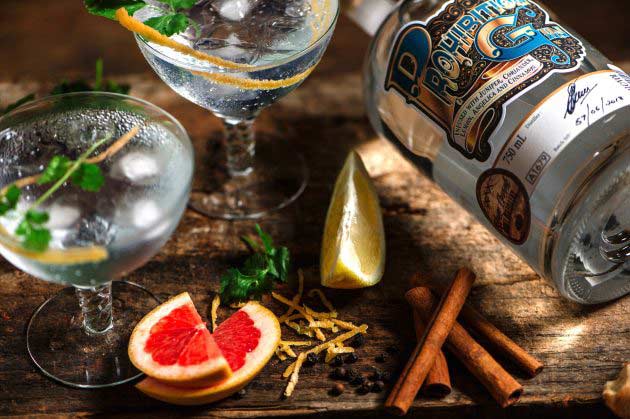 The Prohibition Pink Gin, also at 43%, is Silver Creek’s Craft Gin further infused with raspberries and blueberries, with a touch of hibiscus flowers and rose water. The result is a refreshing drink that is both aromatic, flavoursome and romantic.

“To us, the aromas of Prohibition Pink Gin conjure up images of an exotic eastern bazaar. There’s tantalizing sweet Turkish delight and crushed pepper corns,” says Mark. On the palate, it offers a fine balance of sweetness, spice and zest that follows through in a long, satisfying finish.

Both new Prohibition Gins are sold in a distinctive traditional bottle, complete with finger-loop for easy carrying.

Tucked away in an old mine building in Gauteng’s Randfontein, the state-of-the-art Silver Creek Craft Distillery does everything by hand – from mashing and fermentation to distillation and bottling. This process allows for extra special care, which is why every bottle is signed by the distiller.

It quickly rose to fame last year with the launch of Silver Creek Distillery’s moonshines, boosted by a five-medal victory at the 2017 Michelangelo International Wine & Spirits Awards.

The unique Southern Moonshine collection of high-quality sipping drinks is led by the flagship Clear Shine; and, Charred Shine, which is similar in flavour to a good bourbon. Alongside them, there’s a range of flavoured ‘shines: Apple Pie Moonshine; Bon Fire Moonshine, with a zip of hot cinnamon; Salted Caramel Moonshine; Chocolate Moonshine and the all new Margarita Moonshine.

The new Prohibition Gins retail at around R360 a bottle and are available at selected bars, restaurants and liquor outlets around the country. Visit www.silvercreekdistillery.com for more information.

Join and explore the online conversation about Silver Creek Distillery and its pair of Prohibition Gins by using #silvercreekcraftdistillery and #ProhibitionGin or finding them on Facebook, Instagram and Twitter by using @SilverCreekSouthernMoonshine.

More about Silver Creek’s Mark Taverner: Silver Creek Craft Distillery founder and chief distiller Mark Taverner knows how to have a good time. Much of his working life has been dedicated to hospitality and it was on this journey that he fell in love with American iconography. During a Harley-Davidson motorcycle tour to the USA in 2014 he noted the rise of craft distilleries and the legal production of moonshine. After two and a half years of study and research – including a stint at Moonshine University in Louisville, Kentucky – Mark decided to set up his own craft distillery in Gauteng. And so Silver Creek, its Southern Moonshine and Prohibition Gins were born. Lufthansa A350-900 Lands at Home Airport in Munich