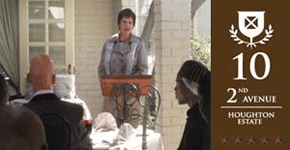 THE OWNER OF THE 5-STAR boutique hotel 10 2ND AVENUE HOUGHTON ESTATE in Johannesburg, Anita Wasserman, recently awarded staff members with long service certificates at a staff luncheon held at the hotel, which was attended by all staff as well as former managers.

Says Anita: “We could not be successful without the support and loyalty of our staff. Without them, we could not have evolved into the successful establishment it is today.”

“Our guest experiences at the Gracious Living in Luxury properties are extended through our services and our staff. They are an integral part of the business and our return guests find it encouraging seeing the same faces and superior service levels on return visits. We empower staff through incentives such as bonuses and certificates of excellence,” Anita stated in her welcoming address to staff.

“It is labour-intensive for hotel management to constantly spend time on training new staff and as a team, we find it advantageous to have our staff working as a loyal and conscientious team on a long-term basis. “

Included in this celebration of teamwork at the hotel, former general managers attended the luncheon, greeted by the current General Manager, Urs Kern and Anita.

When asked why they bothered to attend an event for staff at the hotel after they’d moved on to new paths in their careers, the unanimous response was: “Once one has worked with Anita, you remain part of her hospitality ‘family’ as it’s so easy to remain loyal to her modus operandi of empowering and rewarding staff for good service.” Anita’s former career as a lecturer at a teachers’ training college and her nurturing disposition is certainly advantageous in this era of discerning travel to and within our beautiful country.

The Wassermans purchased the Houghton property in 1995, converting it into one of the first sought-after guesthouses in Johannesburg. By 2003, the property was renovated extensively over six months and received a 5-star rating as a Boutique Hotel as a result.

Anita plays an active role in the operations of her deluxe Gracious Living in Luxury hospitality portfolio of two properties. They also own the 26 SUNSET AVENUE LLANDUDNO private guest villa in Cape Town, which was completed in 2008 and nominated in the category of Best Luxury Hotel South Africa 2013 in the global Business Destinations Travel Awards.