Wesgro’s Trade Promotion Unit has announced that it has helped facilitate R2,8 billion in export deals in the 2017/18 financial year, which ended on 31 March 2018. These deals are expected to create 734 jobs over the next five years.

In line with our mandate to help secure outward foreign direct investment (OFDI) into the rest of Africa, the Trade Promotion Unit also facilitated R190 million in OFDI deals during the quarter.

Congratulating the team on their efforts, Wesgro CEO, Tim Harris, commented: “Through facilitating business agreements, accessing necessary finances, investor and company matching, meticulous market research and forging strategic collaboration and partners, our Trade Promotion unit has successfully boosted our local economy and more importantly, created 734 jobs this past financial year. This is no small achievement, given the economic challenges faced by South Africa over the last year.”

Working to promote Cape Town and the Western Cape’s exports, while maximising the international competitiveness of exports – the unit’s approach is twofold: to promote global exports of goods and services from local companies and support the operations and expansion of Cape companies into the rest of Africa.

During the financial year, the unit undertook: 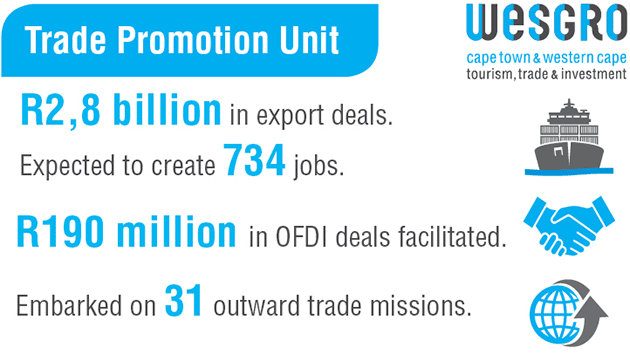 Two priority sectors for the unit in 2017/18 were wine and halal promotion which will remain key for the new financial year.

Securing funding from the Western Cape Department of Economic Development and Tourism (DEDAT), Wesgro Trade Promotion unit has developed, and is currently implementing, a Halal Export Strategy (HEP). This will feed into DEDAT’s larger Halal Strategy for the province, including the establishment of a Halal Industrial Park and Halal Skill Development. A key component of the HEP is to bring international buyers to the Western Cape at the October 2018 Halal Expo – which will welcome approximately 15 international buyers.

Emphasising Wesgro’s intentions for the year ahead, Harris added: “The Trade Promotion Unit is instrumental in assisting Western Cape companies to extend their footprint into global markets, especially into the rest of Africa. We will continue in the new financial year to identify global opportunities to benefit local companies with the objective of growing the Cape’s economy and creating jobs, and we will continue to position ourselves as the gateway to the many exciting opportunities that are arising across the African continent.”

Executive Mayor, Patricia de Lille said: “These results are indeed exciting and demonstrate the impact of our efforts to actively promote local companies and their products and position Cape Town as a forward-looking, globally competitive business destination. I am specifically excited about the work to further enhance connections and business opportunities with the rest of the African continent. We look forward to even more deals in the near future and more jobs being created for our people”.

Western Cape Minister of Economic Opportunities, Alan Winde, added: “Businesses from the Western Cape have once again shown their strength, securing international deals that will create 734 job opportunities for local residents. These deals were made possible by the hard work of the Wesgro team, guided by the focused economic strategies set by the City of Cape Town and Western Cape Government. We particularly welcome Wesgro’s successes in growing wine and halal product exports as these are important elements of our Project Khulisa plan to grow the agri-processing industry.”