The 2015 ATDI Report shows that many countries are recognising and prioritising adventure tourism, by benchmarking resources and policy against 10 pillars to drive growth, writes Des Langkilde.

The fifth edition of the Adventure Tourism Development Index (ATDI), released in March 2015 by the Adventure Travel Trade Association, assesses adventure tourism potential for countries around the world.

The purpose of the ATDI is to facilitate adventure tourism policy and planning aimed at driving economic growth that is environmentally and culturally sustainable. It uses 10 pillars, drawing data from a range of sources, to gauge a country’s readiness to compete in the adventure tourism sector.

The ATDI can be helpful to governments considering an adventure tourism development strategy or strengthening an existing one. Tracking performance in the ten pillar areas provides a guideline for responsible development, helping to identify areas in need of more focus and attention.

The ATDI 2015 contains 28 Developed countries and 163 Developing/Emerging countries. Countries are designated Developed (blue) or Developing (green) based on UN classifications. 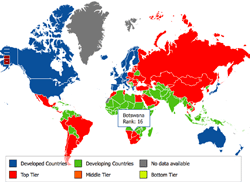 The interactive map groups countries into three clusters: High (Top Tier), Medium (Middle Tier) and Low (Bottom Tier). These groupings represent nations with similar scores and therefore a country’s competitive set. The idea being that countries ranked ‘Medium’ or ‘Low’ should aim to move into the ‘High’ category.

So, how do African countries compare in Adventure Tourism?

The rest of Africa’s countries are ranked in the Bottom Tier, with the exception of Western Sahara for which no data was available.

According to the 2013 Adventure Tourism Market Study:

• The adventure travel market in North America, South America and Europe has experienced an average yearly size increase of 65% from 2009 to 2012.

• The average spend on adventure trips *excluding airfare and gear) increased nearly 20% over the same period.

• 69% of adventure travellers reported online research as their preparation method.

• The percentage of adventure travellers using Facebook has more than doubled between 2010 and 2013.

Previous: Foreign Labour in the Tourism Industry
Next: Adventure Operators in Africa