Each “off-road” location will be captured with Google’s Street View Trekker, a wearable backpack topped with a camera system designed by Google. The Street View Trekker backpack is walked through trails or pedestrian walkways on foot, and automatically gathers images as it goes.

The first phase of the project has seen 22 volunteer trekkers cover 33 trails across the Cape Peninsula, including seven routes up Table Mountain, five beaches and three urban trails such as the Sea Point promenade.

The team has explored more than 150 kilometres on foot over a six week period and will cover nature reserves across the country over the next few months.  The project has gained support from various tourism stakeholders: Wesgro – the official tourism, trade and investment promotion agency for Cape Town and the Western Cape, SANParks, Cape Nature, Ezemvelo KZN Wildlife and lead project partner South African Tourism.

“We are very excited to back this opportunity to deliver the real South Africa to people all over the world via Google’s widely used platforms,” said Margie Whitehouse, Chief Marketing Officer of SA Tourism.

The project comes in the wake of Google’s launch of South Africa: Mzansi Experience in March 2016, which helped the world explore South Africa’s iconic destinations such as the Kruger National Park, Table Mountain, and the Cape of Good Hope via 360-degree imagery from the comfort of the viewers armchair.

Andre Van Kets, co-founder of Drive South Africa, is heading up the #TrekSouthAfrica campaign. Van Kets hopes to get locals from across the country to assist in mapping out Mzansi’s trails and tourist attractions. “We have an epic six-month trip planned, with over 20 national parks, eight UNESCO World and many other wonderful destinations in all nine provinces on our schedule.” said Van Kets.

“We want to engage with individuals and local communities along the way, so that we can bring Mzansi’s best attractions to Google Street View. We’re looking for people to suggest highlights in their areas, help us trek their neck of the woods and ultimately be a part of this exciting project. We want this to be a campaign by South Africans from all walks of life.”

To learn more or apply to volunteer as a local trekker visit the #TrekSouthAfrica website at www.googletrekkingwith.drivesouthafrica.com

Tourism Tattler is on board. Will you be?

About the author: Jarred Manasse is the Content Manager at Drive South Africa. For more information: www.drivesouthafrica.co.za 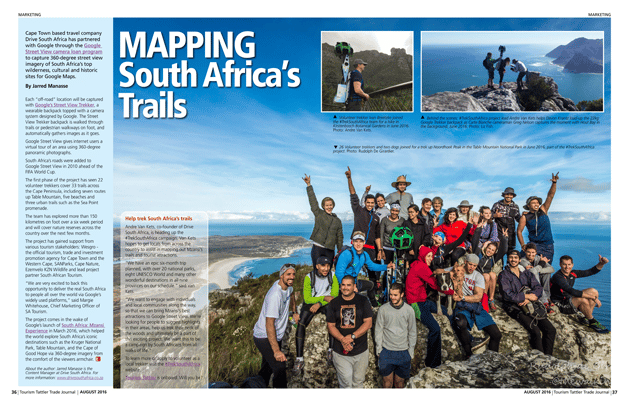 How To Create Brand Ambassadors